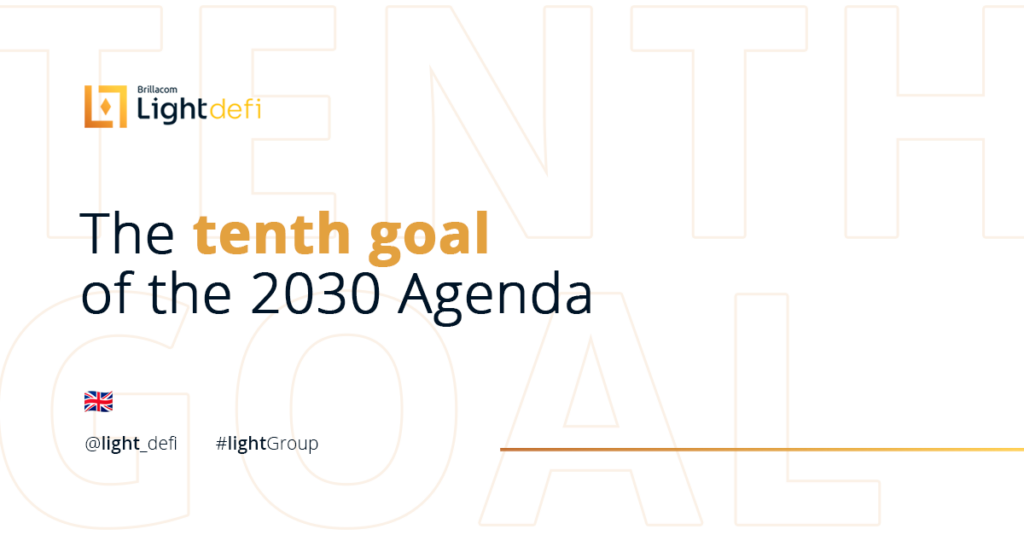 Continuing our series on the 2030 Agenda, which represents an agreement signed in 2015 by the United Nations to achieve essential goals to improve the lives of all people around the planet and which is directly aligned with the Light DeFi project, we will, today, talk about the tenth goal.

Briefly, the number 10 objective of the 2030 Agenda is: To reduce inequality within and between countries.

First, it should be noted that income inequality has grown considerably since the 1980s, as well as the distribution of wealth within countries. China, for example, has shown strong growth and has become a global potential, however, it has been facing a rise in global inequality.

Because of this, the 2030 Agenda brings as one of the Sustainable Development Goals, the reduction of inequality within and between countries.

It is known that social inequality is present on all continents and there are places where the problems are extremely evident. Therefore, seeking effective actions and measures are essential to solve the issue.

According to the UN document itself, to achieve the desired scenario, the tenth goal has 10 fundamental steps, see:

By 2030, progressively achieve and sustain income growth for the poorest 40% of the population at a rate greater than the national average.

By 2030, empower and promote social, economic and political inclusion for all, regardless of age, gender, disability, race, ethnicity, origin, religion, economic condition or other status.

Ensuring equal opportunities and reducing inequalities in outcomes, including through the elimination of discriminatory laws, policies and practices and the promotion of appropriate legislation, policies and actions in this regard.

Improve the regulation and monitoring of global financial markets and institutions and strengthen the implementation of such regulations.

Ensure a stronger representation and voice of developing countries in decision-making in global international economic and financial institutions, in order to produce more effective, credible, accountable and legitimate institutions.

Facilitate orderly, safe, regular and responsible migration and mobility of people, including through the implementation of planned and well-managed migration policies.

Implement the principle of special and differential treatment for developing countries, in particular least developed countries, in accordance with WTO agreements.

Encourage official development assistance and financial flows, including foreign direct investment, to States where the need is greatest, in particular least developed countries, African countries, small island developing States and landlocked developing countries, according to their national plans and programs.

By 2030, reduce migrants’ remittance transaction costs to less than 3% and eliminate remittance corridors with costs above 5%.

What do you think about this action plan? Do you believe that the expected results will be achieved by 2030?

Grupo Light’s main project is the construction of photovoltaic plants, in order to stimulate the generation of clean energy on the planet. Projects like this bring jobs to the residents of the region and stimulate the local economy, which means that we are moving towards the tenth objective of the 2030 Agenda.

Light DeFi had an amazing and successful year in 2021, we are convinced that 2022 will be even better. After all, we managed to buy the land to start the construction of our first power plant in the interior of Ceará, Brazil, and we had the launch of our token on the BigONE Exchange, thanks to a joint effort by the entire Light DeFi community. We also celebrated the launch of our Light Energy Drink and Light Bank.

Keep following our social media for more updates on the 2030 Agenda and its goals.

Join Light DeFi and be part of this revolution!